I’d been considering writing a post on this topic for a while, inspired by the ongoing tradition of Sydney including things that don’t currently exist on their operational network maps. 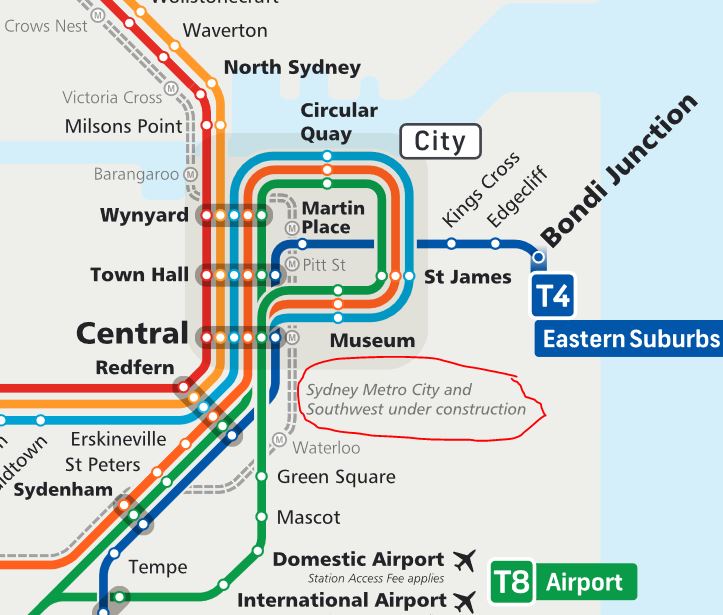 But now it seems that PTV in Victoria have been inspired by our northern neighbours and applied this thinking to our own rail network map. Mark Williams spotted the new map on a train this week (thanks to him for letting me use his photos) and I think that this version is a step backwards for its design.

I have two main issues with this new map. The other one will be covered in a separate post shortly, but here we are going to briefly talk about why two of the major changes to this map are not good ideas.

The rail network map now includes grey lines and names to show the Metro Tunnel, which is currently under construction and is not scheduled to open to passengers until 2025. It also has three extra stations (Goornong, Huntly and Raywood) listed in the legend as “construction complete 2021-22”.

In my opinion, neither of these things belong here.

It all boils down to this: people use this map to work out how to get around. In this situation, a passenger isn’t going to care about whether a station or line is opening in a couple of years. That’s of no help to them if they are trying to figure out how to get from Sunshine to Caulfield today.

Put simply, a map intended for use on an operational network should only include services and infrastructure that are currently open and available for use. Adding other things just creates visual clutter – both in the legend and graphically – making the map more difficult to read.

The easiest thing to do is to remember the golden rule of OpenStreetMap and apply it elsewhere – “map what’s on the ground”. This means that if something isn’t currently there, it should not be shown on the map (with some minor exceptions but these are not shown on the standard map tiles).

Including things that people can’t actually use on a current network map is both unnecessary and slightly harmful. It may be nice for gunzels, but isn’t much use for the travelling passenger.

At least they didn’t add in the Suburban Rail Loop…