Recently I was looking through some old documents related to Alphington.

Buried within Hansard from 1948 was a document entitled the Alphington to East Preston Railway Construction Act. This Act of the Victorian Parliament authorised the construction a railway from Alphington along Darebin Creek to the then-brand new public housing estates just east of Reservoir.

I had never heard of this proposal and little information seems to have been documented anywhere other than Parliamentary records and newspaper articles.

I had a dig through Trove (an incredible resource that never ceases to amaze me) and found quite a few articles referencing this project. These newspapers have been the source of pretty much all of the information available outside the Act itself.

Victorian Premier John Cain was a key proponent of the project. In November 1946, he announced the route of the railway and the total estimated cost – around 190,000 pounds. This estimate had climbed to 240,000 pounds by 1948.

The route would have a double track railway branch off what is the Hurstbridge Line today between Alphington and Darebin Stations and head north-west up the west side of Darebin Creek. It would continue as a single track through East Preston and terminate at the Broadway/Boldrewood Parade intersection in Reservoir.

As today, the impending construction of a railway was a major selling point for real estate in the area.

There was some controversy over the acquisition of five properties which caused some temporary political difficulties. However, this was not what ultimately prevented the project from going ahead.

Victorian Railways was, at the time, beginning to experience one of its many periods of financial difficulty. In 1956, when the Alphington to East Preston Railway was scheduled for construction, the Chairman of Victorian Railways, E. H. Brownbill, published a list of projects that had to be postponed on account of a lack of funds. As an aside, the list of other projects is interesting reading in itself (including works on the underground rail loop).

On 17 November 1959, the Act was repealed. The Government Gazette does not detail the reasons why, other than stating it was “no longer expedient that it be constructed”.

It seems that it was a foregone conclusion by this point and much of the public interest had dissipated; the announcement didn’t even make The Age.

This is my attempt to map the route of this railway from the descriptions contained in the Act and various newspaper articles. I have taken the liberty of naming the four stations and estimating where the terminus would have been.

The colour scheme and font have been inspired by the Victorian Railways maps of the time. 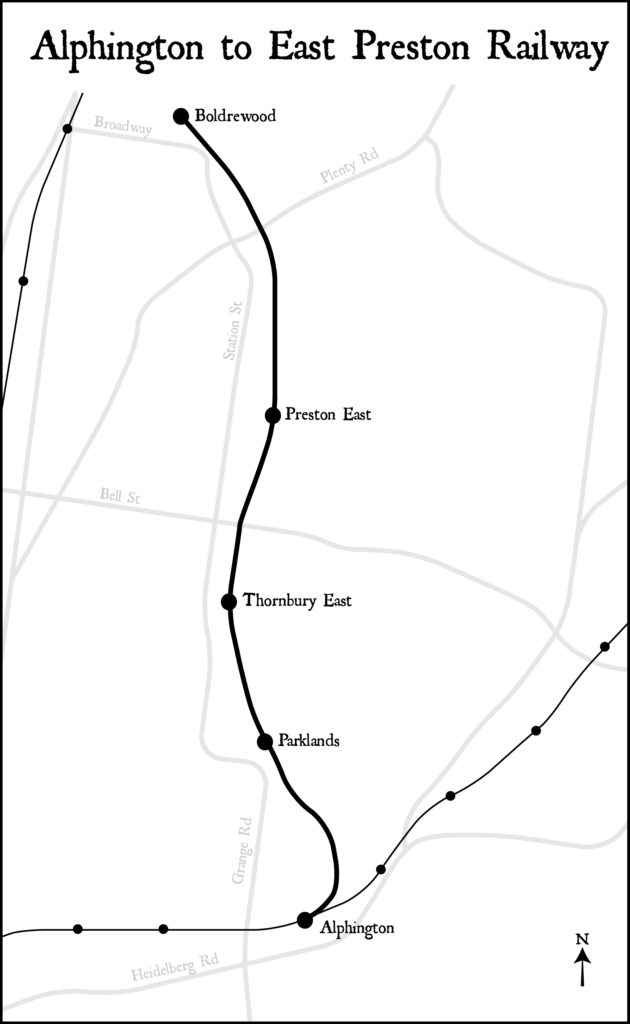 I should emphasise that this is purely an exercise in alternative history and is not a proposal or advocacy of any sort.

The route is described in the original 1948 Act but there is a more detailed description contained in the announcement by Premier Cain in 1946:

“There will be four stations on the three and a half miles of new railway line, which will be a double track from Alphington to Darebin St and a single track from there to the terminus at Wood St. The railway will branch off the “down” line of the Heidelberg track at Alphington, pass to the east of Associated Quarries, then north-westerly, cross Darebin St on an overhead bridge near Fulham Rd, pass under Dundas St near Kerr St, cross Bell St by overhead bridge near Short St, and end at Wood St near Hannah St. There will be elevated stations on the north side of Darebin and Bell Sts and goods sidings at Darebin and Wood Sts.”

One of the most interesting things about this railway is that you can still make out where the land was reserved for the infrastructure by examining property boundaries along the proposed route. Here are two examples in East Preston and Reservoir:

Quite frankly, it is unclear to me why the railway stopped at Boldrewood Parade and was never proposed to link up to the railway at Reservoir or Ruthven. To my mind, there should have been five stations instead of only four – one at what is the Summerhill Village would have been a useful interchange. Both of these could be part of the scope but I have chosen to stick to the historical details for this map.

This is a quick and simple map but it helps to illustrate what might have been.

The December 2014 and December 2016 editions of Newsrail have articles on the Alphington to East Preston Railway proposal:

Very interesting about the proposed rail line to East Preston . I used to live in E.P in Tyler St and at the time from 1969-1972. And Birchwood St used to be Housing Commission Flats levels 1 & 2 and I lived on the cnr of Tyler and Laurel Streets